WE LOVE IT HERE, YOU WILL TOO!

Welcome to our B&B!

Our History Our Host & Staff

Located directly across the street from the Palacios Bay, our Bed and Breakfast has both the feel of a relaxing, waterfront cottage and the charm of an early 1900’s, Southern-style home. But the Peaceful Pelican  is more than just a relaxing, waterfront getaway. It’s a home rich with history. Built in 1910 by the McGuires, it has evolved in a number of ways over the years.

A barn in the back of the house was converted to the first private school in Palacios and Matagorda County.  It offered courses in cultural arts in addition to academics. Music lessons were taught upstairs in the house by Martha McGuire. Several other teachers assisted her at the school and taught academic subjects.

During World War II, Palacios was home to about 7,000 troops and housing was in short supply. Because of this, the house was split into apartments. It was probably around this time that the First Floor Suite was added on.

In 1961, Palacios was hit by Hurricane Carla, leading to a couple of new additions to the house. The stain glass windows of the Pelican came from the Methodist Church, which was destroyed in the hurricane. And, the lamp on the post in front of the house is one of three original weather warning lamps formerly located on a high tower on 5th street.

Clayton Lee, the longest owner of the house, purchased the home in 1970. He added the lovely brick patio, and his wife, Libby, spearheaded a successful campaign to have the house registered with a historical marker in 1987.

In 2005, Edith Gower and Margaret Doughty purchased the home and renovated it for two years before opening it as The Peaceful Pelican in 2007.

Previous
Next
The Peaceful Pelican has a great atmosphere. Paula has done a good job of retaining the historic home feel while adding special, unique touches.
Christine Turk Stransky
Facebook

At the heart of your experience at The Peaceful Pelican is Southern hospitality. Your Host Paula along with Innkeeper Theresa pride themselves in ensuring your stay is beyond expectations. 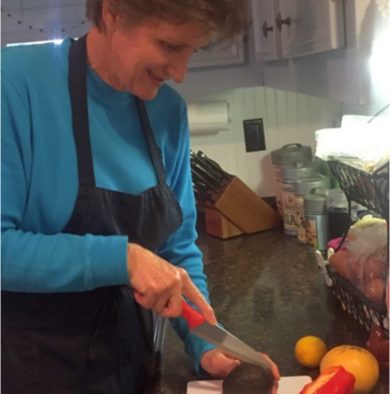 After years of traveling the world in a corporate job, Paula decided to make the waterfront in Palacios her home. She purchased The Peaceful Pelican in 2014 with the dream of creating a peaceful and fun get-a-way for Texans as well as other travelers. Always mindful of the stresses of everyday life, Paula’s goal is for guests to forget the stresses while relaxing in a comfortable environment and engaging in activities that bring them closer to nature and a tranquil state of mind. Paula has always loved nature and has enjoyed hobbies such as gardening, fishing, birding, nature photography, kayaking and hiking.

Theresa always wanted to have her own Bed & Breakfast, but life always got in the way -- kids, career, and then grand kids! After years of teaching and working in the retail world, Theresa finally landed at The Peaceful Pelican and not a moment too soon! Her greatest loves are her husband Roy, sons Robert and Connor, and the most beautiful grand kids in the world...Brantlee, Bostyn, and Luka! Cooking is her second passion! She loves to cook for our guests and is constantly trying new recipes and perfecting old ones! You never know what she's going to whip up for breakfast! In addition to keeping up with activities at The Peaceful Pelican, Theresa also runs a small souvenir/gift shop in downtown Palacios. If you can't find her at The Peaceful Pelican or the gift shop, she's on a beach somewhere near by!

Ruth graduated with honors from the International Culinary Academy in Houston, Texas. She and her husband travel the world, making it a point to take cooking classes while visiting places in order to learn more of their culture. Her culinary career has included owning a catering business, being a personal chef, teaching classes, and coaching a culinary class at the local high school. Ruth is available to cook when booked in advance for special meals to celebrate a birthday, anniversary, an event with your company, family and friends or just a nice dinner with the love of your life.
Does this look like it's a fit for you?
View Available Rooms & Rates